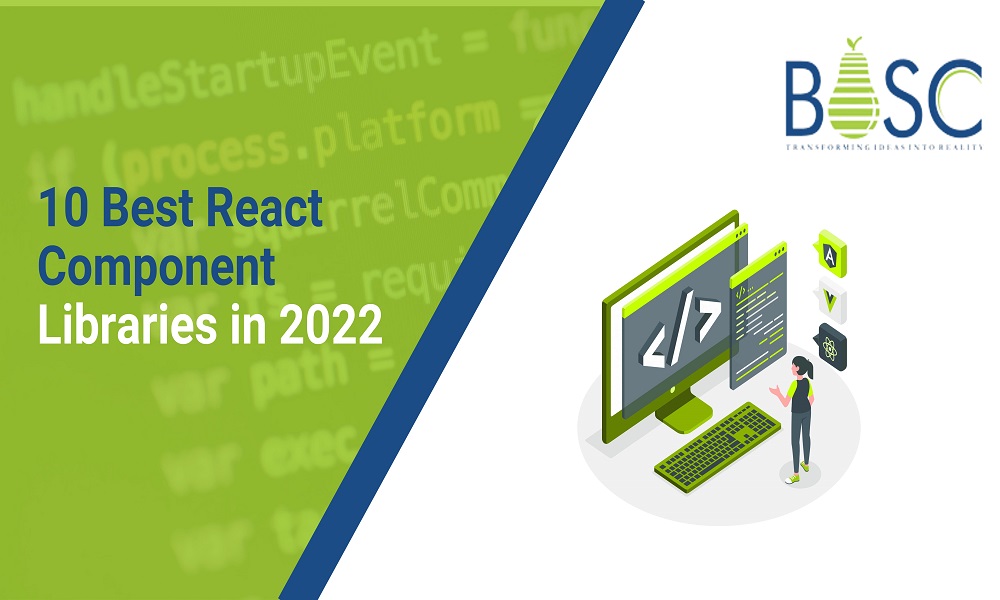 ReactJS JavaScript libraries began to get massive recognition worldwide when it was launched in 2013. However, developers need to use ReactJS for all types of applications.

The most significant cause for the growth of ReactJS is its array of React component libraries. Moreover, programmers have created a beautiful user interface for desktop and web app development , and also for the hybrid apps will use easy-to-use libraries.

In this article, you will learn some of the top React JS component libraries, which are great in aspects that comprise design framework, components, utilities, animations, layout, and user interface.

What are React components?

Earlier, developers used to write thousands of lines of code to create a single-page application. These apps follow a traditional DOM structure, and making changes to them was challenging. If they find the mistake, they must search for it manually in the application and update it accordingly. It introduced a component-based approach to solving this issue. In that approach, an application is divided into a small logical code group called components.

A component is considered a core building block of React application. It makes the task of building the UIs much easier. Each Component shares the same space, but it works independently from one another, and it combines all in the parent component, which will be the final UI of your application. However, react components have their structure, methods, and APIs, which can be reusable per your requirement.

How many types of React components are in the programming language? 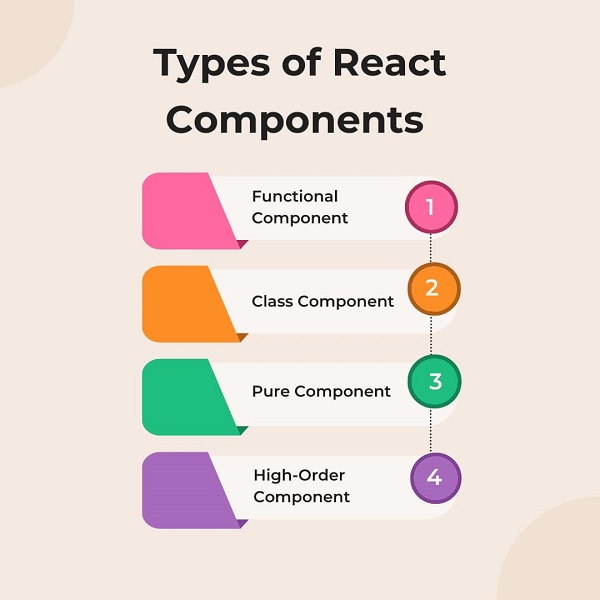 High-order components called the HOC are less like a React Component and more like a pattern, resulting from React’s Compositional nature. The primary use case of the HOC is to share logic with the other components. However, a number of the components are based on the number of elements in the array, known as HOC. This function takes the array from state and maps each element in the array by transforming every element into the React component.

What is the React component lifecycle?

React web apps are a collection of multiple components which are independent and run based on the interactions that are created with them. Each of these components has its lifecycle. Lifecycle refers to a series of actions that reinvoke in various stages of a component’s existence. React Component lifecycle has the following three stages:

After the initialization of components has been completed, the Component is mounted on DOM and rendered on the webpage. React follows a default procedure only for naming conventions of predefined functions. The function of “Will” will represent it before a specific phase. In the same way, the function that contains “Did” represents after completion of the phase. The mounting phase of components consists of the following two functions:

componentWillMount() function is invoked before the Component is mounted on DOM.

componentDidMount() function is invoked after a component is mounted on the DOM.

In this phase, states and props of Component in React are upgraded, followed by an event or the command from a user like pressing a key, clicking the mouse, etc. It will aid you in activating the web pages, which will behave according to the commands and needs of the user.

Which are the popular React component libraries in 2022?

Material UI in React component is great for faster and simpler web development. You can easily and will quickly create the design system or start with the material design. There are ready-to-use components that you can plug into any of the applications without the help of app developers. It also offers a range of tools and an API that enhances app creation. Material-UI is the most prevalent UI library in the React community, with millions of development experts around the globe.

It is the quite popular entity of Bootstrap in the CSS, HTML, JavaScript, and CSS libraries. It has come with the inclusion of UI creation elements for both web and mobile apps. It is also referred to as a JS library. With the help of its components, React-Bootstrap will work without any bootstrap.js or jQuery dependencies. The updates with React Bootstrap will deliver the most suitable solution for any development with the help of incorporating features in virtual DOM. The coders have to import an individual component like a React-Bootstrap/button and help to minimize the amount of code for sending it to the client.

React router has gained great popularity as a declarative programming model. Whenever you create an application with React, it is a great idea to have some components and elements that you can compose declaratively. The collection of these components will help you to add URLs to bookmarks if you want. The possible way to navigate in React Native is that you can get the React Router as a solution that will solve multiple tasks. It has an effortless option for handling navigation on a single page. Beyond that, the library provides seamless screen-to-screen shift and server-side rendering with intense sustenance for accurate testing.

This library is completely free from jQuery because it does not have the virtual DOM. Rather than the semantic UI library, a development team can effortlessly access the formation of striking and responsive web pages with articulate code. Semantic UI React is also better, as you will need more customizable elements to unleash uninterrupted creativity. Sometimes, you may face issues in the library that are complicated.

Also Read: React JS vs Vue.js! Which is better for Javascript Framework?

Ant Design lists itself in the React component library as it has the design system for enterprise-level products. It has a flexible design and a 50-component library. With the help of Ant Design, you can consider designing and developing a full-size application. It has a date picker, dropdown, button, and other components. These components serve as building blocks for enterprise application development. It also suggests you use React third-party libraries for components outside an Ant Design specification, like the React Hooks library or React JSON View. An Ant Design Pro has a template, components, and the design kit to go with it. However, AntD packages are created for data visualization and mobile and graphic solutions, so an expert can start with packages dependent on the particular enterprise use case.

HPE developed Grommet, which gives a more vibrant look and feel than the other components like Ant or material UI. It can provide accessibility, responsiveness, theme, and modularity; everything is available in this small package. It also makes the website design eye-catching. With compliments, you can get the functionality to include layout, controls, input visualization, media, color type, and incredible utilities. Beyond that, you will also get support and documentation, including a template.

Chakra UI provides better modular, accessible, and simple user interface components for creating the apps. These components are also accessible, and it follows the WAI-ARIA standards. You can easily customize the components that match the design specifications. You will have n both light and dark themes, interface, and components which you can include in inputs, icons, and tooltips to make it famous. The community is also very active, so you will get all types of help required whenever you are stuck on an issue.

Nowadays, companies are working on the development of cross-browser-compatible mobile. So the app developer-facing device or operating system-based compatibility issues will find this OnsenUI component very interesting. It utilizes JavaScript and HTML5. OnsenUI is implemented with Vue, React, and Angular. You can ensure that a component will be styling itself based on the platform. The single code will work on both Android and iOS. Hence, custom elements will help you find details about the elements in CSS.

React UI framework segment is based on a design system that developed great products on the web. It has 30+ components built on top of a React UI primitive. You Can get the default themes with Evergreen for reflecting Segment’s Current brand, and there is the classic theme for the first version of Evergreen. The Evergreen Figma library, available in the Figma community, makes it better.

Rebass consists of eight foundational components, all in a small file. These components are extensible and themeable for creating a responsive web design. It uses the styled system and is a great starting point for extending into your app’s custom React UI component. Hence, a ThemeProvider can also help you with this.

React is a popular JavaScript library that provides many components to support you in creating applications and sites. Rather than creating every Component or feature from scratch, you can use React UI component libraries and select the components per your business requirements.

We hope you have a basic idea about React libraries which will help you in the development phase. Thus, if you are looking for a React development team with complete knowledge of the React Frameworks, then connect with Bosc Tech Labs, a team of skilled developers.

1. What are third-party React libraries?

2. Does the React library have open-source development?

React, also referred to as ReactJS, is a free and open-source front-end JavaScript library for creating a user interface dependent on UI components. Meta and the community of developers and organizations usually maintain it.

3. Why is React known as a library?

React has a library that aids developers in creating the user interface as the tree of the small pieces known as the components. However, a component combines HTML and JavaScript, capturing all the logic needed to display a small section of the larger UI.