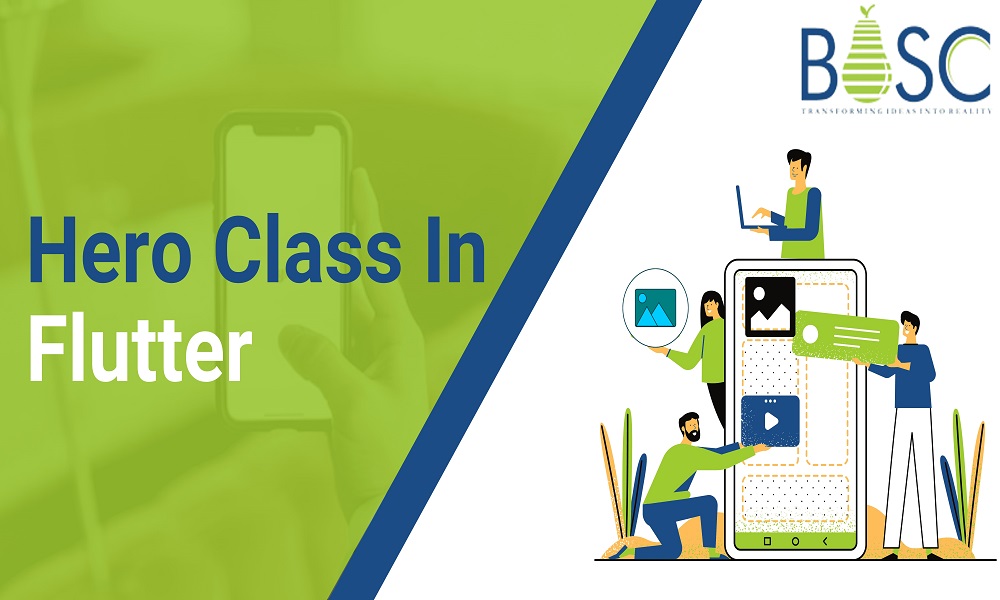 What is the Hero Class in Flutter Development?

In general, a Flutter is an open-source framework by Google for developing natively compiled and practical applications from a single codebase. The hero class in Flutter is the widget that marks the child for specific hero animations. Generally, hero transitions are a standard process in mobile application development.

It can be widely used as an indicator to allow users to understand that they have changed the screens while focusing on interaction over the center and front. The hero widget in Flutter can create the hero transition automatically around two navigator routes.

When the page routes are popped or pushed, then the complete content of the screen can be replaced by another screen. When some animations change the content, it will be advantageous to orient the user for the practical features to move physically from one place to another. That kind of animation is mainly known as hero animation.

What is the usage of hero in Flutter?

During the transition, the hero widgets will fly in the overlay of the navigator class. When they are in flight, it will never show in the original locations on the new and old routes. Wrap it in the hero widget to label the widget as such a feature.

When navigation takes place, the hero widgets on each route can be identified by the HeroController. A hero animation can be triggered for each pair of the hero widget with the same tag.

When the hero is in flight already, if navigation occurs, then the flight animation can be redirected to the new destination. Here the widget shown in-flight at the time of transition is the hero’s child of the destination route. To trigger the hero animation, a hero has to exist on the new page animation’s first frame.

Routes should never consist of more than one hero for each tag.

To work everything perfectly, the heroes and navigators’ overlay stack must be axis-aligned. The animated hero’s bottom right and top right coordinates are converted to global coordinates. From there, it is converted to the coordinate space of the stack. When the hero is not axis aligned, it may fail in significant instances. Therefore don’t rotate your heroes.

The widget tree for the hero in various locations must be identical to make the animations look effective. The target’s widget is used to make the transition by default while going from route A to route B. The hero’s widget of route B can be placed over the hero’s widget route A. When the flightShuttleBuilder is supplied, the output widget can be shown at the time of flight transition instead.

Both routes A and B’s heroes can be hidden by default when the transitioning widget animates the in-flight above two routes. The placeholderBuilder can be effectively utilized to show the custom widget in its place as an alternative when the transition has gotten into the flight.

How the nested navigators will work?

What is the impact of hero animations?

The hero animation is simply a practical element of the one screen that starts flying to the next while the application goes to the next page.

The hero animation can take elements such as an app icon known as the hero, and when the page transition is triggered, by clicking on the icon, the hero will fly to the next page. When the user navigates back to the earlier page, the animation will go in the other direction. Finally, the icon will get back to its place without any issues.

How to create the basic hero animation?

Creating the basic hero animation is an exciting process. The hero animation is the most accessible animation to Flutter very effectively. It does not require more setup. The app icon widget can exist on both pages without any issues. Here users have to inform Flutter that both pages are linked.

It can be possible by effectively wrapping the element like an icon in the hero widget.

It will be supplied with a tag to give a name to the hero. It is more essential since when you have multiple heroes on the same page, the hero perfectly knows where to fly without any issues. The app now has the idea that the hero widget requires you to fly to the next page. Now it is necessary to find a place to fly.

Here a hero widget on the second page is needed with the same tag.

How you can Customize hero animations?

The hero widget can let you customize the complete aspects of the animation. Here you can find out some of the few possibilities.

What is the adding placeholders?

From the scenario mentioned above, you now have the idea about Hero Class in Flutter. To make such things possible, you must hire remote Flutter developer to complete this process. These experts have more skills in such a process to get better results.

1. What is the hero widget?

A hero refers to the widget of the files which is in between the screens. Develop the hero animation by using Flutter’s Hero widget. Fly a hero from one screen to the other screen.

2. What is the usage of hero in Flutter?

The old route vanishes, and the new path becomes visible in your project. A common visual feature in both ways is that it helps orient a user for the functionality to physically move from one page to another during a route’s transition. Hence, this animation is referred to as hero animation.

3. How do you swap the speed of a hero in Flutter development?

In case to change a speed transition, you will have to adjust a PageRoute transition duration. In any case, if you desire to keep a default transition, then you can construct the class by integrating a MaterialPageRoute.