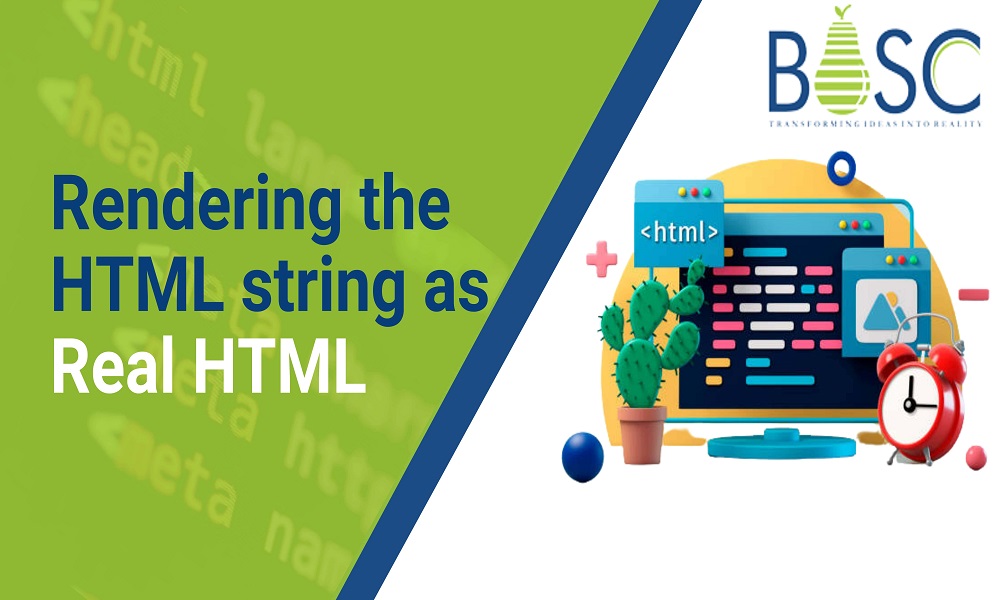 How To Render HTML String As Real HTML?

React JS is the open-source and advanced JavaScript library that efficiently builds intuitive user interfaces, especially for single-page web applications. It is a renowned platform which provides an agile approach to delivering an engaging user experience with updated UI features and accessible functions. Rendering is a critical task in react functioning, and for this, some top-most web development company like Bosc Tech Labs(www.bosctechlabs.com) have the developer who manages the variation and process with their expertise.

The rendering components do not function according to the user as these are an integral part of React Component. The complete React lifecycle functions with several application stages when the instantiation of React Component takes place. When the rendering takes place for the second time, the updated state is known as the re-rendering state of React. Here the React elements re-render with an automated approach when any props or state vary their position or function.

In this case, the React components and successive child elements render and re-render, respectively. This process is not affected because of variation in the value of React props or state.

Like the State updates in React, the prop also updates. In this process, the value of the state varies, which further leads to the React element re-rendering.

The variation in the React state relates to the prop or setState for updating the related variables. The React re-rendering of the element reflects the variation in the application element, which further attains the updated state.

In programming, rendering react component is scheduled whenever the value of the state varies. It is not a meaningful process and might take time for the process, and the process’s duration is not fixed. Any variation in React state triggers the requirement of update in React, termed the useState function. This function is a Hook which enables the React state variables within the functional components of React.

Prerequisites For Rendering The React Elements:

When the updates in the React element take place, the re-rendering of the user interface takes place automatically. The React engineers arrange the codes in a manner that arranges themselves according to the updates.

The React state is an object storing multiple integrated values like HTML, object string, array, or number. Below is the process for rendering the HTML string as the Real HTML values in React development. Below is the coding:

It is the common coding which is used for HTML rendering. The major issue is that this rendering takes place as an HTML string and not for real HTML. It generates the difference in several attributes and reacts functioning. Hence for rendering as the real HTML, companies hire dedicated ReactJS experts who convert the codes into HTML files.

The above-mentioned is the conversion coding of string into a simple HTML file. Further if you get the result <h1 style="color:Red;">Hello World</h1>,, the codes will appear like this:

It is the perfect HTML in a proper format. But sometimes, this markup becomes a severe issue. Using the HTML entities, it can be decoded and sent to the dangerouslySetInnerHTML .

It is crucial information about rendering React and HTML in their authentic form. HTML rendering is a critical project which involves HTML rendering with content-based requirements. In this process, several values of the state objects are used for the effective rendering process.

In this article, the primary approaches for HTML rendering by the conversion of HTML is using dangerouslySetInnerHTML, is discussed. Hope it helps you with HTML rendering from the state, providing you with the desired outcome.

1. What is the re-rendering component in React JS?

React re-renders its component when you call a setState function for changing its state. Hence, the child components are only updated when the parent components’ state changes with one of those functions.

2. What is the use of the Hook function in React?

Hooks is the new functionality which has been introduced in React. It permits you to use state, and the other reacts Features without writing a class. Hooks are functions that “hook into” React state and the lifecycle features from the components of the function.

useState is Hook which grants you to have any state variables in the functional components. You can pass this initial value to this function and return the variable with the current state value; the other function will update this value.