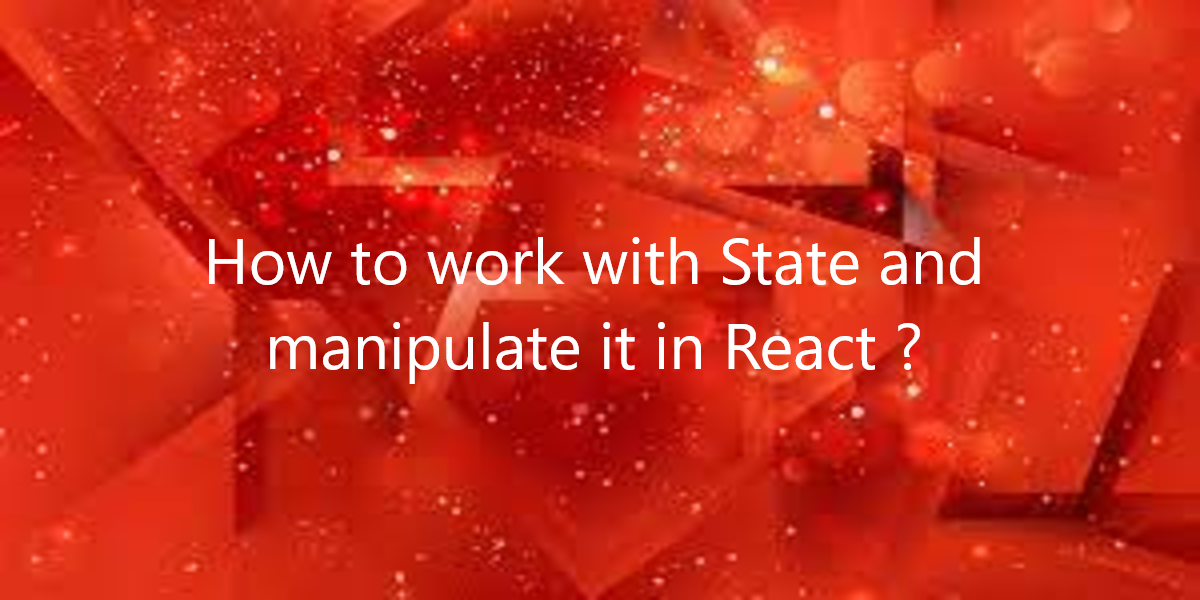 How to work with State and manipulate it in React ?

Components in React provide the JSX which is similar to HTML. So, in this article, we will see how to work with State and manipulate it in React.

How to work with State and manipulate it in React?

Components can contain HTML tags and javascript expressions, ReactDOM somehow processes it. Everything works fine until you only have to display static content. But what if your website is dynamic and you have to change something on the frontend, based on user interaction. In this case, you can use something like events and event handler. It will interact with the user. But how would you go to tell ReactDOM that displays something based on changes that occurred due to user interaction?

The way to re-render a component with ReactDOM is via a state change. It is a built-in object in react components. It has some predefined functionalities and contains some information about the UI.  Also, it controls the whole behavior of a component. We can make use of the state object to throw information on components. So, ReactDOM will render something according to that information. Basically, it is a dynamic data storage for components. We can also internally manage the state for different purposes. Change in state forces React to call render function.

2) After creating your project folder i.e. foldername, move to it using the following command:

We can access state objects anywhere in the component with “this.state”, the state is local so, don’t try to access it from an outside component, if you need it outside then somehow you can pass it as props.

The class component provides us a setState function we can call it anywhere in the component to manipulate state.

In this example, we are printing a line to indicate that the callback function gets executed just after the state updates. This can be used when we have to perform some execution strictly after state updates. A simple use case for this scenario can be fetching any dynamic content through API. That is when we click on the algorithms section from the homepage of the website it fetches the list of all topics. This can be done by GET request inside the callback function of setState.

Run the application using the following command from the root directory of the project:

Now open your browser and go to http://localhost:3000/, you will see the output.

Points to remember while working with the state:

So, in this article, we have been through how to work with State and manipulate it in React. Also, feel free to comment with your suggestions and feedback on the post. Moreover, at BOSC Tech Labs, we have a team of highly experienced React JS developers. They can assist you in developing your customized web app. So contact us to hire experienced ReactJS developers.