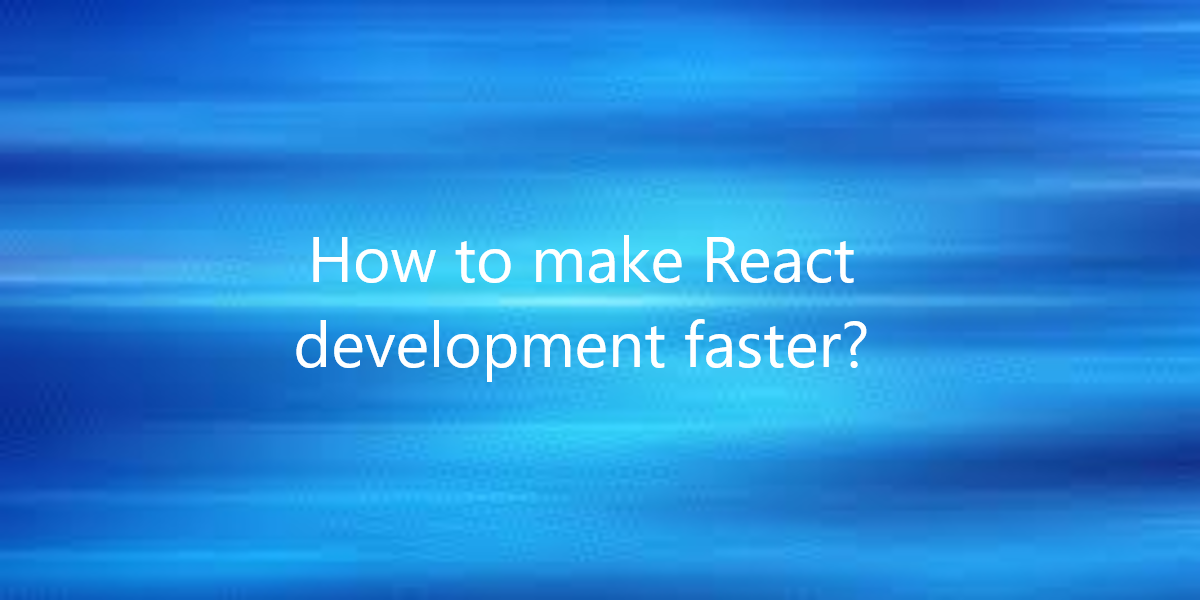 How to make React development faster?

React components are a great way to create isolated and reusable building blocks for developing different applications. So, in this article, we will see how to make React development faster.

Changes to components can be easily synced across projects, as Bit controls all the component dependencies. It can also update all of them anywhere. It even extends Git to let you merge component changes in different projects. Your team can collaborate in a shared component hub, where components are visualized and can be easily discovered. It removes the overhead around reusing shared code and lets developers instantly create a reusable box of their components. Using Bit is the fastest way to prevent duplicate component rewrites, standardize development and build together as a team.

Storybook and Styleguidist are environments for rapid UI development in React. Both are great tools for speeding the development of your React apps. There are a few important differences between the two, which can also be combined to complete your component development system.

StoryBook: Storybook is a rapid development environment for UI components. It allows developers to browse a component library. Also, it allows users to view the different states of each component, and interactively develop and test components. It can help you develop components in isolation from your app. It also encourages better reusability and testability for your components.

Styleguidist: React Styleguidist is a component development environment with a hot reloaded dev server. It also has a living style guide that lists components propTypes and shows editable usage examples based on .md files. Styleguidist supports ES6, Flow, and TypeScript. It also works with Create React App out of the box. The auto-generated usage docs can help Styleguidist function as a documentation portal for your team’s different components.

This official React Chrome devTools extension allows you to inspect the React component hierarchies in the Chrome Developer Tools. It is also available as a  Firefox Add-On.

Using React devTools you can inspect and edit component props and state while navigating through your component hierarchy tree. This feature lets you see how component changes affect other components, to help design your UI with the right component structure and separation. The extension’s search bar can enable you to quickly find and inspect the components you need, to save precious development time.

This Chrome extension (and Firefox Add-On) is a development time package that provides power-ups for your Redux development workflow. It lets you inspect every state and action payload, re-evaluating “staged” actions.
You can integrate Redux DevTools Extension with any architecture which handles the state. Also, you can have multiple stores or different instances for every React component’s local state. Moreover, users can even “time travel” to cancel actions. The logging UI can be customized as a React component.

While these aren’t exactly devTools, they help to quickly set up your React application while saving time around build and other configurations. While there are many starter-kits for React, here are some of the best. When combined with pre-made components (on Bit or other sources), you can quickly create an app structure and compose components into it.

This widely used and popular project is probably the most efficient way to quickly create a new React application and get it up and running from scratch. This package encapsulates the complicated configurations (Babel, Webpack, etc) needed for a new React app, so you can save this time for a new app. To create a new app, you just need to run a single command.

This command creates a directory called my-app inside the current folder. Inside the directory, it will generate the initial project structure and install the transitive dependencies so you can simply start coding.

React boilerplate template provides a template for React applications focusing on offline development and is built with scalability and performance in mind. Its quick scaffolding helps to create components, containers, routes, selectors, and sagas — and their tests — right from the CLI. While CSS and JS changes can be reflected instantly while you make them.

Unlike create-react-app, this boilerplate isn’t designed for beginners, but rather to provide seasoned developers with the tools to manage performance, asynchrony, styling, and more to build a production-ready application.

So, these are the few React tools that developers can use to make their development process faster. We hope that these tools will help you in your next React project for quick development.

So, in this article, we discussed how to make React development faster. You can also comment and let us know which framework you use for UI development. Also, you can tell us which framework do you like the most. Feel free to comment with your suggestions and feedback. At BOSC Tech Labs, we have a team of highly experienced React JS developers who can assist you in developing your customized web app. So contact us to hire experienced React JS developers.