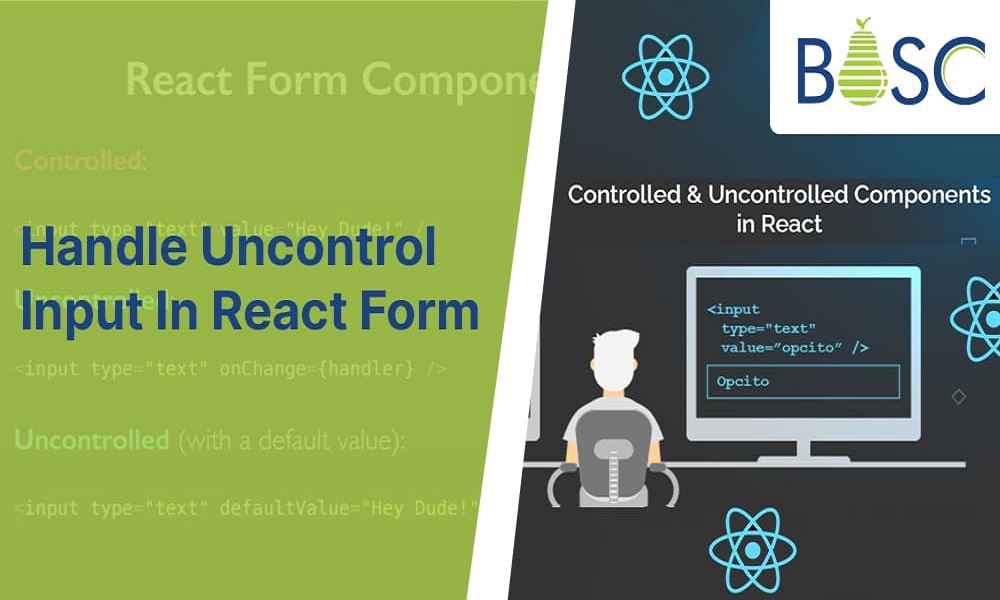 Change the Uncontrolled Input in React

Coding for different types of applications requires a lot of considerations, and one thing that programmers deal with is states during inputs. When working with React.js, which is a suitable framework for creating dynamic and intuitive apps, coders can work without focusing on states.

This is possible with the uncontrolled input fields as they are not reliant on states for input. Using ref and attribute names, it is possible to adjust the input value easily here. For the best functioning with uncontrolled inputs and altering them is necessary. You can find react developers from Bosc Tech Labs a well-reputed mobile app development company who will assist in every manner.

However, how exactly does this work as a concept and related coding? Let’s discuss.

What do you mean by uncontrolled inputs in React programming?

To better understand uncontrolled inputs, let’s consider one example. If one possesses a specific form with some types of input fields, then the input form changes will appear with the attribute name and HTML ref tag with uncontrolled input type. So, it is better to know the right time to use the uncontrolled input files when it is necessary to avoid states-based handling.

Here is a code example for single change changes in uncontrolled components:

The uncontrolled component keeps the data details and source code within the DOM. Therefore, programmers sometimes find it easier to integrate non-React and React codes. Since you will require to handle less codework here, the integration process also occurs fast.

What are the solutions for changing uncontrolled inputs in React.js programming?

You can use different techniques to rectify the uncontrolled input field-related issue that can appear. For example, while running a simplified React component with a form containing one controlled input, you can have warnings like the MyForm adjusting uncontrolled input for controlled type text.
The following methods are suitable to handle when you get an error.

You can adjust the default value within the input you added, with one the right codework. The following should work as a good example here:

In case the API renders the input fields dynamically, this approach should work favorably well.

Another type of solution can work to manage the uncontrolled input-altering issue. For this, one should possess a type of handler named onChange within the input field. Examples include “checkbox”, “textField”, and more. After that, manage the activities using the onChange handler mainly.

The issue with the “MyForm adjusting uncontrolled input for controlled type text” error is mainly that the input without value is controlled. One input value should align accurately with the state variable in the codework.

The “this.state.name” input is not prepared beforehand, so the condition does not always automatically match the example accurately during evaluations. So, the input type is uncontrolled initially. Here, after programmers activate the onChange handler, that completes the setup of the this.state.name input.
This controls the issue, and programming admits the input as controlled. The steps for that include initializing the this.state.name within the constructor first, e.g., the “this.state = {name:”}” command.

This controlled the input from the beginning, but ideally. Use this method as a last resort if the other solutions do not work for you. This is not the best solution if you are dealing with dynamic fields.

Moreover, it is important to note that the corresponding prop with the state variable is not always needed. Plus, if the value prop comes with an undefined value, that input is considered controlled. So, it is not always necessary that the state and props variable are always together. The solution is not suitable as an overall solution, but there should be many factors active first for it to work.

For the right results, though, you should opt for professional mobile app development services who aids you in every way. As they are trained in these types of codework and can conduct the steps after analyzing the issue with quick results.

1. What is the uncontrolled input in React development?

2. How do you handle the change in events?

Handlechange is triggered by an input element and it triggers the change of this.state.value property which in turn changes the value of the input field. It is necessary because an react uses the states to appear the information in the DOM.

3. How do you handle the input change in React?

The most usual method to handle form input value change is to handle them with a react app development. It is the technique known as controlled components. We can develop these components with input,textarea, and some of the selected elements. It maintains its own state, and update is based on the user input.