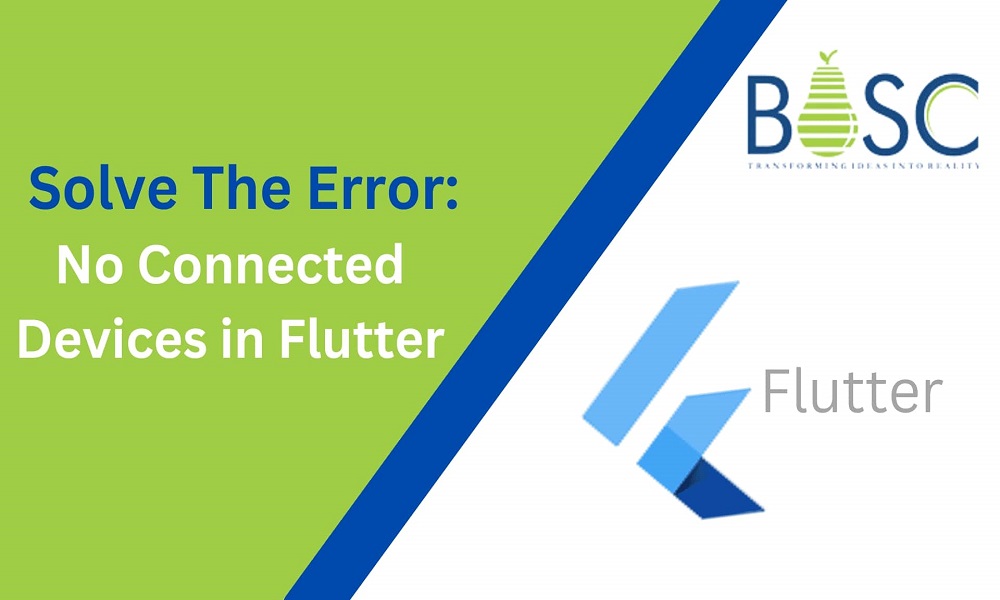 How To Solve No Connected Devices In Flutter?

Using Flutter, you can see the following message: Because you’ve not started an iOS simulator or an Android emulator, users will receive the error code “No supported devices connected” or “Please connect a device.” We will demonstrate how and where to set up and execute a Flutter application on both actual emulators and devices and emulators because Flutter enables both devices.

When clients construct a software tool with Flutter using a fresh installation, they occasionally encounter a warning, such as no Connected Devices when they do a Flutter run. Therefore, we will discover How to Fix No Connected Devices in Flutter in the further article.

Which Are The Method To Unravel Not Connected Device In Flutter?

Users must first execute a command such as the one below when they encounter a warning like Flutter’s No Connected Devices:

Based on the outcomes of the command mentioned above, the client may take the following action:

Flutter supports all Android and iOS simulators/devices. Execute the Flutter equipment command in the console to see if Flutter sees the paired Android operating system. Due to the Mac with an Android system and the Android device being established, it needs an Android smartphone with Android Version 4.1 (API level 16) and above to get ready to launch and evaluate the Flutter application development on the Android device.

The methods are outlined below:

Run the command to get available to launch and evaluate the Flutter application here on the Android emulator:

5. If Somehow The Connections Popup List Does Not Include The Device

6. Connecting The Device To Flutter:

Let’s be explicit about this. Install Android on the Device

How To Sync An Android Device To Mac?

Charge your phone to the computer with a USB cable. Authenticate the desktop to connect the device if requested by the device. Execute the Flutter devices script in the terminal to see whether Flutter sees the associated Android operating system.

How To Connect Flutter With AVD?

1. Create connectivity to Select a device:

Select the Flutter Device alternative in the lower right-hand corner of the main screen when VS Code is active.

The system will appear with a range of suggested connections once users select the Flutter Device logo. The newly generated emulator should be chosen.

How To Connect Flutter In VScode?

Frequent updates to the modules are sent forth. Whenever information is available, VS Code in Flutter automatically defaults upgrades plugins.

What Is The Reason For Android Studio Not Able To Detect The Device?

Consider the following if the device isn’t significant indication by the system Device Manager or the RAD Studio:

What Is The Process To Facilitate Android Flutter?

They are installing and deploying Flutter applications around an Android device. Connect the phone to the computer via a USB cable. Authenticate the PC to connect the devices if offered by the phone. Execute the Flutter devices function inside the desktop to see if Flutter app development sees the paired Android phone.

How To Access The Route For The Flutter SDK?

For Downloading the Flutter SDK with a standard configuration without using Git.

How To Install The iOS Flutter Application?

Visit Updating Flutter to discover how and when to modify an existing model of Flutter.

Using the procedures listed above, connect the device to the PC and attach the device using a USB cord. Allow the PC to connect the devices if allowed by a connectivity notice on the device. Run command flutter runs to launch the application. The methods above should resolve your issue!

This article has given you an idea of how to solve the no connected devices in the Flutter project. Thanks for reading this article!

Bosc Tech Labs is a well-reputed app development company with dedicated Flutter experts who have complete knowledge of Flutter widgets, libraries, and so on.

If you are excited to join your community of experienced teams, then feel free to connect with us!

1. What is the device ID in the Flutter project?

It will show how a device will work using the device_info package in your Flutter applications. It will also show you when the user clicks on the raised button, unique device Android or iOS information, such as the name of the device, version, OS, etc., will appear on the screen. It is shown on your device.

2. How to fix the no connected device if it is found in Android Studio?

If your device needs to be detected correctly in RAD studio or the system Device manager, you must first check that your android device is unlocked and not sleeping while connected to a USB. Then set the appropriate option in the settings or developer options. Hence, make sure that your Android device is enabled for USB debugging.

3. Why is my cell phone not detected by Flutter?

While using the USB cable, plug your gadget into the PC. If it is promoted on your device, then authorize your computer to access it. After that, run the Flutter devices command in the terminal to verify that Flutter recognizes your connected Android devices. Therefore, start your app by running a Flutter run.