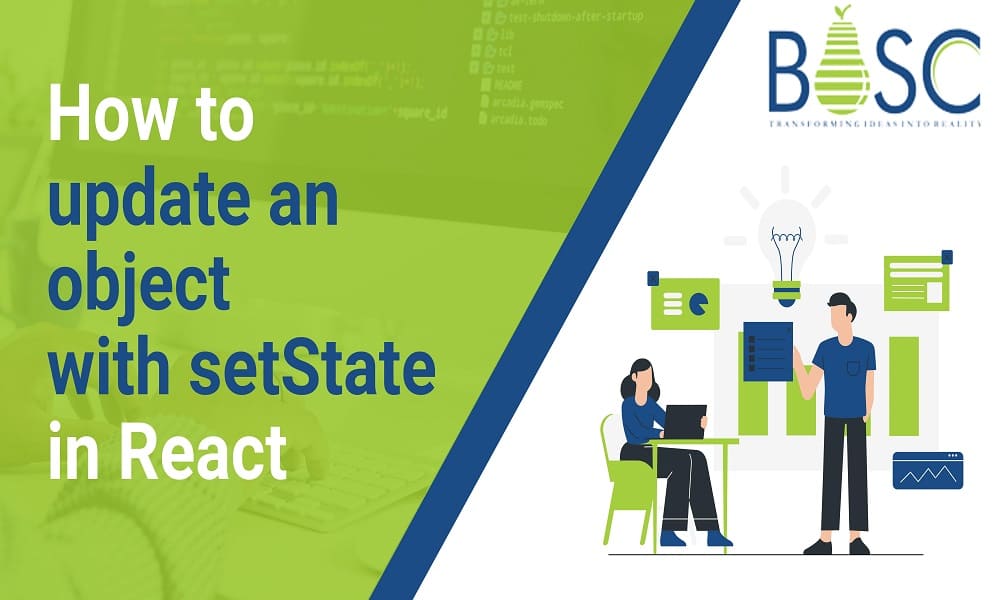 Updating An Object With setState In React

React is a well-known and performance-driven JavaScript library implemented for website development. ReactJS offer numerous methods for representing distinct attributes of ReactJS. Presently multiple Fortune500 and massive-scale organizations such as Instagram, Netflix, and Facebook have implemented React JS technology for functioning and operations.

There are multiple benefits of implementing ReactJS architecture to improve the internal system and workflow of the website and application. Many small and large businesses hire React developers to implement the robust and intuitive application and website development framework.

ReactJS has reached the top rankings of present programming languages launched in the last few years, according to the recorded indices. Further in this article, we will discover novel aspects for updating the object with the setState command in React development. React expertise uses multiple methods to update with distinct procedures. Let us start:

Process To Update The Object With Setstate In React:

setState() method tells React, while updating the State, to figure out the aspect of State which is altered in compliance with its properties. The setState also determines and displays the synced DOM with virtual DOM.

React programmers permit the object updating with the setState() method as a disagreement. The React object’s attributes combine with the state object’s elements, ignoring the existing properties.

Framing the React application with below code:

After framing the project named filename and move it using below command:

Apart from this method, few methods use distinct commands and syntax for updating the objects. Below are the methods described:

This method creates the copy of the original code and then updates the object with setState.

This method updates the object with setState by spreading syntax.

Function Of setState in React:

setState() automatically organizes the required update with the state component React object. When the React State varies in the applications, the element records the re-rendering response instantly. Sometimes the setState updates according to the values of the current State.

It usually requires passing the simple function replacing the object within the setState. It ensures that the call must use the updated and latest state version of React technology.

Significant Difference Between State And Props Of React Technology:

State and props are the abbreviations for properties and features integrated as JavaScript objects. Both aspects have essential data and information that stimulates React output’s rendering.

The significant difference in both React elements is that the state aspect is managed within the Component, which is identical to the declared variables in the specific function. In the case of props, it is transferred to the Component, similar to the React functional parameters. In certain instances, the setState functions in an asynchronous manner under specific distinct event handlers.

In this State, the Child and Parent call setState through the click event. During this, the Child avoids the dual re-rendering. Instead, the React “flush” the updated State at the browser event end. This situation usually results in delivering massive scale applications’ substantial and improved performance improvements.

ReactJS technology frames personalized and customized virtual DOM, which further improves the application performance due to a faster approach than standard DOM. There are the software development companies who hire the React experts for developing the application initiative and interactive UI.

It functions the SEO-friendly approach and the Data and Component pattern in React, which ultimately improves the readability and efficiently manages the massive scale React application. The React is used with other application frameworks, simplifying the entire scripting process. It efficiently helps to increase productivity and efficient maintenance. Implementing React guarantees fast rendering and the script provision for strong mobile app development.

1. What is a distinct component in React development?

Components are broken into various pieces of functionality and are used within the other features. This will return the other components, strings, arrays and numbers.

Event handlers discover what action to take whenever the event is fired. It is the button click or the change in text input. However, event handlers make it possible for users to interact with your React application.

3. What is the Virtual DOM?

The Virtual DOM is a programming concept where the UI’s ideal or virtual representation is saved in the memory and synced with “real” DOM by a library such as ReactDOM, which is known as reconciliation.