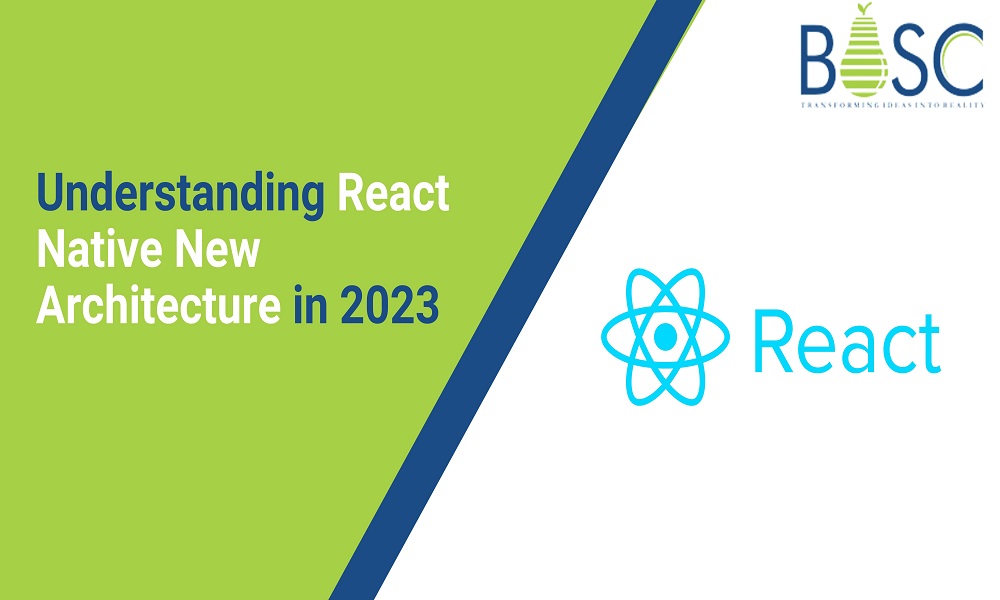 If you still haven’t got a chance to look at the new React Native architecture, it is known as the React Native re-architecture. Then, this blog will give you information about a Fabric Rendered and TurboModule System. Let’s see React Native New Architecture and also its benefits.

What is React Native?

What are the edge of using React Native for Mobile App Development?

Now, let’s see the advantages of React Native and why enterprises use it for mobile app development. 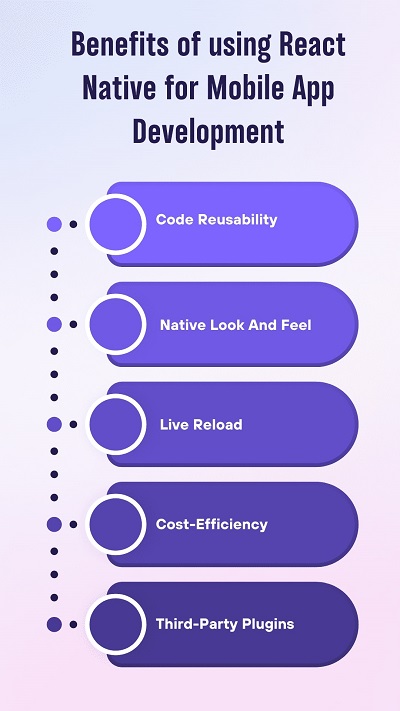 The major benefit of React Native is that a developer does not need to write different code for the various platforms. However, approximately 95% of the code is reused between the two platforms, which aids in increasing development speed and efficiency. Hence, you will get a faster time-to-market and need fewer maintenance efforts.

The live reload functionality of React Native permits you to view and work with the changes in real time. You can create the fixes in code while an app is loading, which will be reflected in the app with the automatic reload. Hence, it reloads the specific area of change to save time on the application.

Developing the app from scratch is expensive, but React Native provides several third-party plugins, including JavaScript-based and native modules. Hence, the third-party plugin will eliminate the requirement for the particular web view functions and helps to enhance an app’s functionality and performance.

Why was there a requirement for the New React Native Architecture?

A bridge plays a crucial role in this communication among the threads; hence, there is dependency, delay, and uncertainty. Therefore, to overcome this dependency, there was a requirement for the new React Native architecture. 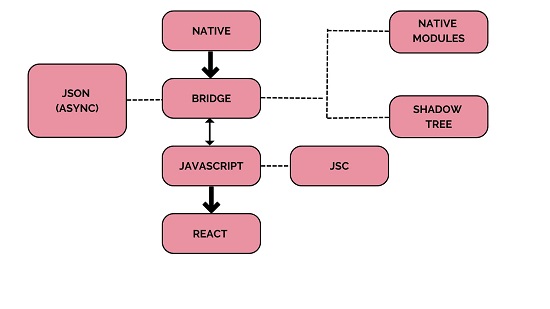 However, since the second quarter of 2018, RN was just newly launched, and at that time, the re-architecture of react Native was under-planning.

All you need to know about new React Native Architecture

To enhance and overcome the drawbacks of the previous architecture of React Native, the new architecture, React Native V 0.70, which has launched recently in October 2022, has added performance and flexibility to the framework.

But, the one thing that remains unchanged in the new architecture is the JavaScript engine Hermes, which has become even more optimized for React Native applications.

As the redesigning of React Native architecture takes on continued development, more data is becoming accessible and readable. Hence, this new design aims to enhance performance and brings it nearer to native apps. It facilitates the integration of React Native framework with a JavaScript-based hybrid framework.

Here are a few of the crucial elements in the React Native re-architecture, and we can also call them the pillar elements. 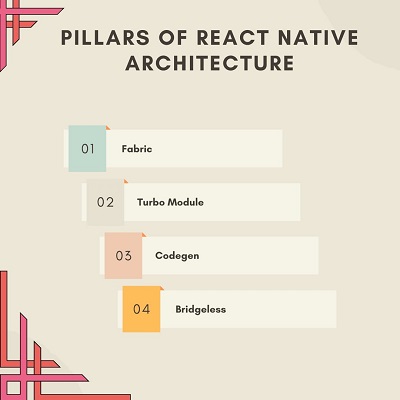 Fabric is the misnomer usually used to refer to an entire React Native architecture. In actuality, Fabric will only illustrate one tier of a complete structure, i.e., the UI layer.

Initially, Fabric will enable the direct shadow tree creation in C++ with the help of the UI manager. Hence, it enhances UI interactivity by removing the necessity to travel between the threads.

In addition, Fabric benefits JSI to disclose UI functionalities to the JavaScript side. It leads to a direct interaction from both ends rather than connecting with the JavavScript side via the Bridge. However, the JavaScript side prioritizes time-sensitive UI tasks and performs them concurrently ahead of any other tasks. Hence, it prioritizes queues for the UI side.

TurboModules are old Native modules with new integration and behavior. The best functionality of TurboModules is that they are lazy-loaded. Hence, JavaScript will load modules as needed and maintain an explicit reference. For programs with a huge number of Native modules, it will automatically reduce the startup time.

Codegen is another practical component of the new React design. The RN program will automatically check it for synchronization and interoperability between JavaScript and Native threads. It will generate the native code during the build time, which is opposed to the run time.

Turbomodules utilize the interface components, and Fabric is called Codegen. All of this is intended to erase the need for duplicating code, enabling the transferring of data without doubt, and is much quicker as there is no longer a need for data validation at each iteration.

The progressive replacement of Bridge with the redesigned JavaScript Interface (JSI) component is the primary objective of the new architecture.

The Bridge is fully removed from React Native, and the major reasons are that it developed unneeded issues and doubts about whether data was received or there are considerable delays.

A layer will supersede Bridge called React Native JSI or JavaScript interface. The objective is to enable communication between the JavaScript and the Native sides without requiring Bridge as the intermediary step.

The JS bundle independence from JSC is the one modification made possible by the JavaScript Core, i.e., JSI. It implies a different JavaScript engine like the Chrome Engine V8, which will frequently take the place of the JSC engine.

In addition, by utilizing JSI, JavaScript will be able to recognize and connect with the Native components explicitly by holding the references to C++ Host objects and invoking their methods. 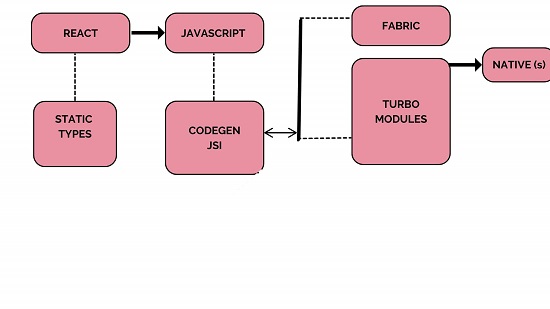 How to Migrate to New React Native Architecture?

To update the React Native application to the latest version, you might wish to migrate to the new React Native architecture. Let’s begin with the initial priorities.

You need the specified release of the ReactNative app for easier updating. You require the react version to access the most recent changes, and you will eventually upgrade to React Native stable release.

After that, please find the most recent react native and install it. We can move to OS-specific improvements later.

You can install the most recent React Gradle plugin for Android after updating to the newest Gradle version. Use the code directly from a Reference guide of React Native. For iOS app development, turn on the C++ language feature that supports iOS application development.

As there are two major migration methods, let’s see below.

The first migrating method involves transitioning from the previous one to the new one. You only need to take the native components from the most React Native version, 0.67, and apply them to the latest React Native Architecture.

Each commit is subject to a separate migration process. Hence every branch demonstrates a transition between various React Native versions. Therefore, these sections are readable and accessible via the main branch.

This method demonstrates the development of TurboModule and Fabric components step-by-step. Hence, unlike the first method, these branches are mostly used for creation.

Hence, it will ultimately come down to maintaining compatibility with earlier versions of the React Native parts.

React Native is a great choice for cross-platform modern business applications. A new react native architecture will add the prevailing benefits of the framework.

If you want to connect with the leading mobile app development company , then, hire React developer who has the expertise and is ready to help you!

Let’s get in touch with us!

1. What are hooks in React Native?

Added Hooks to React in version 16.8. The function components can access the state and the various React features. However, the class components are generally needed. Hooks generally replace any class components, as there are no plans to erase the classes for React app development.

2. What is the new architecture in React Native development?

The new architecture dropped the concept of The Bridge in favor of the other communication mechanism: the JavaScript interface (JSI). jSI is the interface that permits the JavaScript object to hold the reference to C++ and vice versa. Hence, once the object has the reference of another one, then it will directly invoke the methods on it.

3. Which architecture is considered the best for React Native?

The container-View pattern is the most efficient and widely used feature that builds the pattern in a react environment.